What Is Pineapple Express Weed and Did It Exist Before the Iconic Movie?

Ah, Pineapple Express, arguably one of the last great weed films of the prohibition era. Branded a stoner buddy action-comedy by its creators Seth Rogen and Evan Goldberg, the film follows two underachieving potheads (played by Rogen and James Franco) who witness a murder by a dirty cop and a gangster. Unfortunately for the two unlikely heroes, the weed they left at the crime scene — a strain called Pineapple Express — was just so damn delicious that the gangster could identify it by scent alone, which leads the bad guys on a hunt to track down the good guys. Hijinks, hilarity, and explosions ensue.

But what came first, the famous strain or the even more famous movie? And do Pineapple Express flowers fill pot shop shelves across the country simply because of the name, or is there more to it than the Hollywood cool factor? 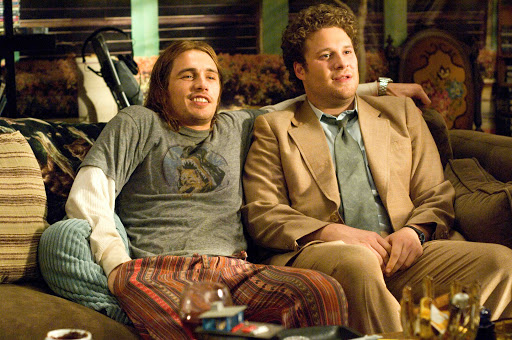 Let’s clear the air here: If anyone tells you that they sampled Pineapple Express flower before the film debuted on August 6, 2008, they’re probably blowing smoke up your keister.

In a 2014 interview with Denver’s “Everyday Show” host Chris Parente, Rogen said that he and co-writer Evan Goldberg invented the weed strain just for the film.

Where did Rogen and Goldberg get that dank-ass name, though? They’ve never said, but before the film dropped, “Pineapple Express” referred to a weather phenomenon known as an atmospheric river, where winds carry moisture from the Hawaiian Islands and dump precipitation all over the American West Coast. When El Niño events occur, those are basically extreme versions of the meteorological Pineapple Express.


But that’s all conjecture, right? We’re taking Rogen on his word (which is probably pretty legit). Let’s take a look at some hard, historical data on Google Trends.

You can check this out for yourself: There were practically zero searches on Google for the term “pineapple express” until the end of 2007 and the beginning of 2008. In the summer of 2007, the first test screens for the movie premiered, and the Hollywood hype machine was in full swing by that Christmas.

If you look at the Google Trends search graph, you’ll see it’s a flatline for “pineapple express” before 2007 — with a teeny tiny bump of activity around January 2005. That’s because from January 7 to January 15, 2005, a Pineapple Express weather event hit Southern California with one of the region’s biggest storms of the decade.

If Pineapple Express the weed strain existed before the film, you’d expect more search activity for the term prior to 2007. And if we narrow the search to "pineapple express weed," we see a complete flatline in Google activity until November 2007. 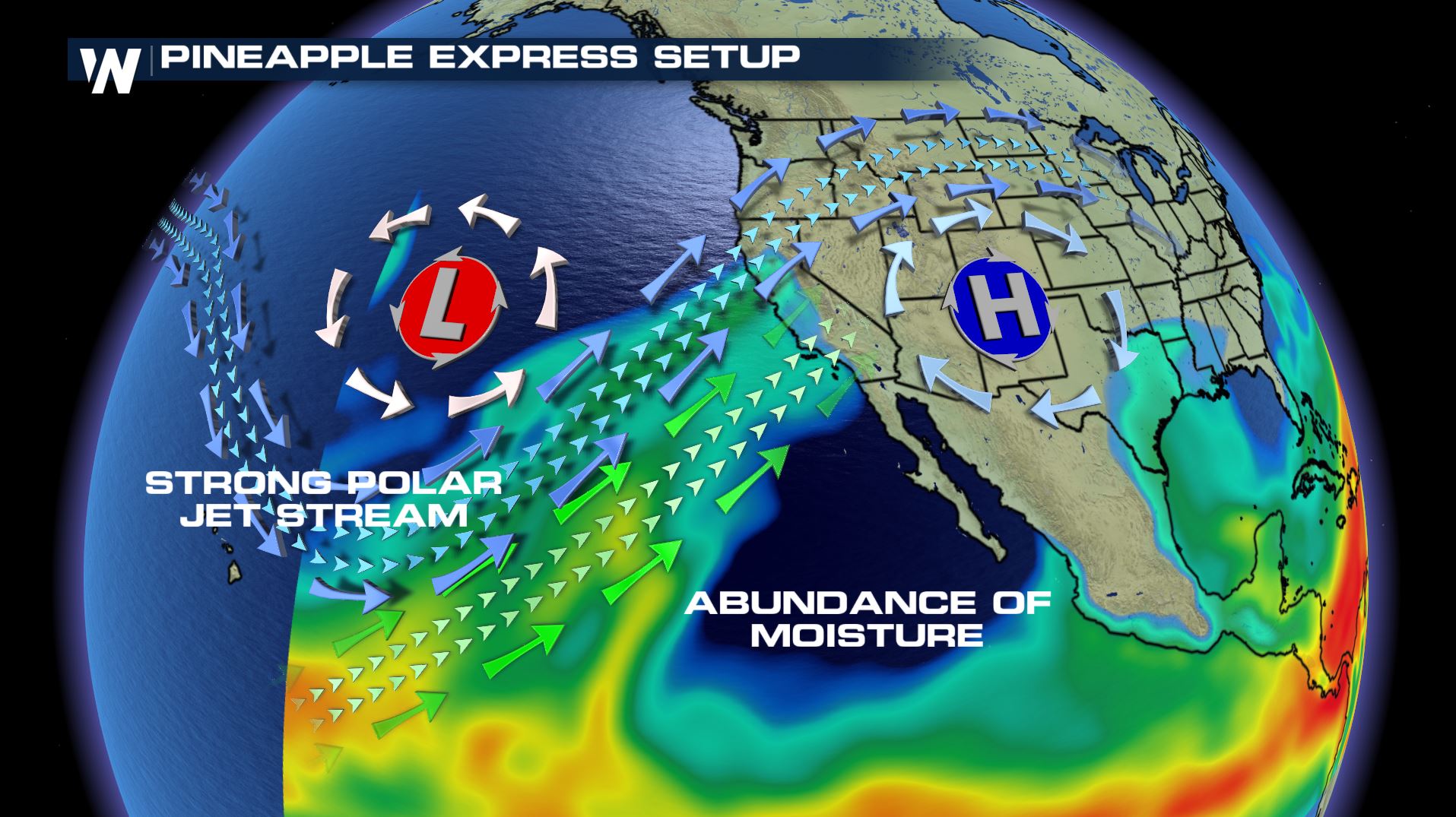 Where Does Today’s Pineapple Express Come From, Then?

According to Leafly’s strain database, Pineapple Express is a cross of the Hawaiian landrace and Trainwreck strains. It purportedly has a strong fruity, citrusy smell, and its heady effects hit harder than a locomotive, though many self-reports claim that the intense high doesn’t last terribly long. That could be due to its high average THC content, which usually hovers around the 20-to-25 percent range. (Higher THC percentages usually mean lower terpene contents, and terpenes likely contribute to longer-lasting highs, as well as delicious flavors.)

However, some cannabis seed companies offer their own Pineapple Express genetics, which don’t come from Hawaiian or Trainwreck. For instance, G13 Labs sells a strain of Pineapple Express that its breeders made from various Skunk parents and Big Bud.


But Rogen himself — a self-taught marijuana maestro who now owns and runs his own weed company in Canada — hinted that none of these genetics may truly define Pineapple Express.

“There was a Pineapple weed,” Rogen said in 2014, “and people crossed it with another thing and made Pineapple Express.” So, here we have the creator of the strain’s name suggesting that one of its parents was actually the Pineapple strain, though that may have just been something he heard through the grapevine and simply mentioned off-the-cuff.

So, what’s the verdict? It’s likely that you’re seeing multiple varieties of weed branded as Pineapple Express. Whether the genetics are truly Hawaiian and Trainwreck or Skunk and Big Bud or what have you isn’t what necessarily characterizes the plant. 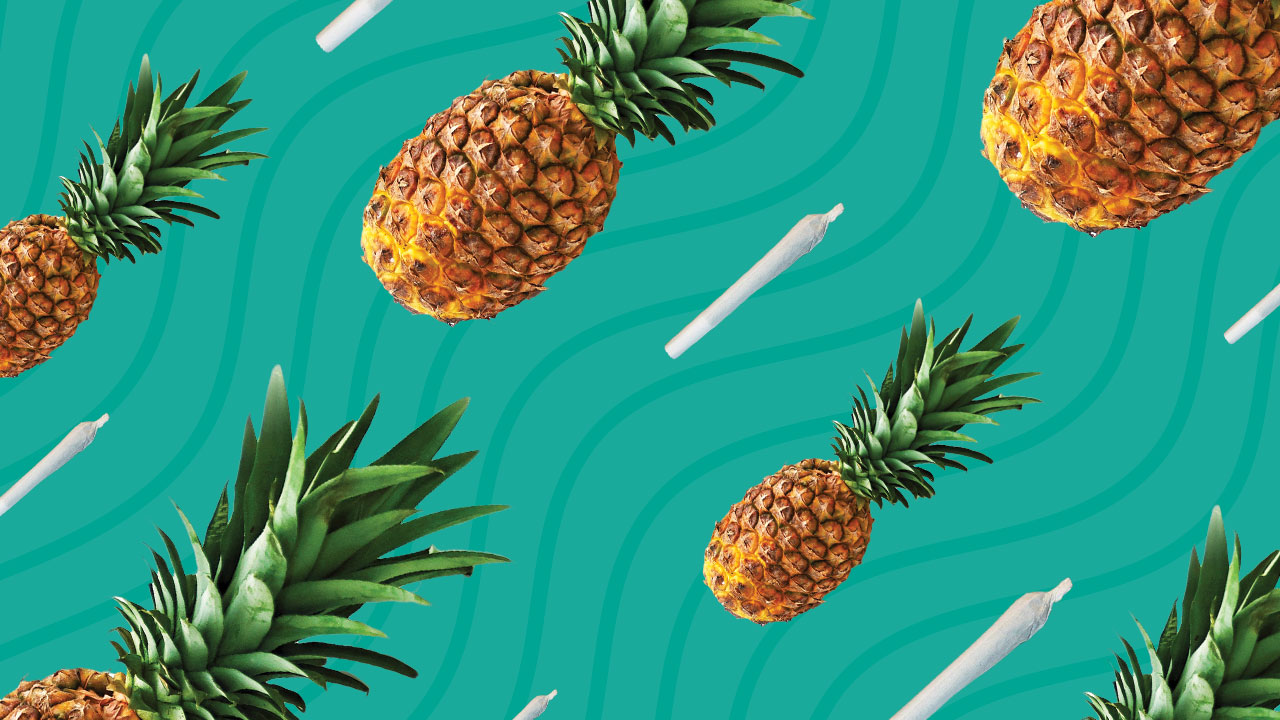 Most people seek out Pineapple Express for its potency and fruity bouquet — and besides, it probably feels badass to blaze a joint of it while watching the eponymous movie. In other words, different cannabis cultivators most likely breed their Pineapple Express for its scents, flavors, and quick-hitting highs, then label it as “Pineapple Express” so customers have some idea of what they’re getting in to. Or, it's a way to capitalize off the brand-awareness and popularity of the movie, as well as Seth Rogen's aspirational stonerdom.

Probably none of these claimed lineages for Pineapple Express really matter to Rogen or Goldberg. Despite running their own weed company in the Great White North, they have no plans to ever sell anything dubbed Pineapple Express in Canada. That’s because Canadian law bans celebrity endorsements for licensed weed, and Rogen and Goldberg are cannabis business owners, not cannabis brand representatives.

“As we were writing [Pineapple Express],” Rogen said during the “Everyday Show” interview, “we were like, ‘If one day we were at a weed store... and someone offers us Pineapple Express, then we made it’” as filmmakers.

Sounds like y’all made it, in both senses of the phrase.