What Is CBM and What Does This Recently-Discovered Cannabinoid Do?

A new study found that a chemical found in cannabis called cannabimovone, or CBM, could unlock new therapies for treating metabolic disorders, eating disorders, and diabetes. CBM is found in hemp, especially a variety known as “Carmagnola.”

What is cannabimovone, though? Chances are, you probably haven’t heard about it before. It’s not as famous as, say, THC or CBD, but it may prove to be just as valuable medicinally as cannabis’s more well-known compounds. Let’s explore the cannabinoid.

CBM Is One of the Newer Cannabinoids on the Block

CBM shares some chemical similarities with CBD and THC. But since the earliest published studies for it didn’t appear until the 2000s, scientists are just now cracking into its secrets.

The latest study, published in the March 2020 edition of Molecules, performed two sets of tests for this cannabinoid. The first used 3D modeling to see if it would bind with any receptors found in the human body. The modeling did: CBM binds to and partially activates two important receptor types known as PPARα and PPARγ (PPAR stands for peroxisome proliferator-activated receptor).

These two receptors control the genes responsible for creating the cells in our major organs — like the heart, liver, kidneys, muscles, colon, pancreas, and spleen — as well as our hormone-regulating fatty tissues. These receptors also regulate our metabolism and are involved in the formations of some cancers. 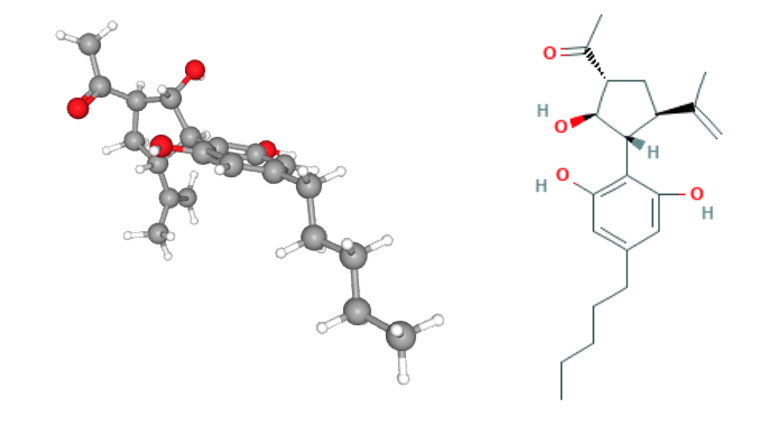 The second part of the Molecules study tested to see if CBM actually binds to these receptors. 3D modeling can often predict chemical binding, but it can’t actually prove if binding happens in the real world. And guess what? The researchers found that, yes, CBM can bind to PPARα and PPARγ and partially activate both types of receptors.

What does that actually mean for patients, though? “Altogether, these results candidate CBM as a novel bioactive compound potentially useful for the treatment of insulin resistance-related disorders,” the researchers wrote. They continued that CBM can “stimulate insulin signaling, paving the way for further… studies to assess the suitability of CBM as anti-diabetic

and insulin-sensitizing drug, thus opening new therapeutic alternatives for those patients still not receiving an effective and safe long‐term treatment.”

Basically, the researchers are suggesting that conditions such as diabetes could be treated by new formulations of cannabinoids like CBM, THC, CBD, THCV, or other cannabinoids found to regulate metabolism or insulin activity. Modern medicine often relies on pharmaceutical drugs to treat the symptoms of a disease or disorder. But if that disease or disorder is caused by defective, mutated, or damaged genes, treating the symptoms isn’t the most ideal approach. Since PPARs directly control the genes that form and manage many of our most critical cells, researchers believe that exploiting these receptors could treat a host of metabolic disorders, eating disorders, hormone-related disorders, or cancers.

Currently, there are some FDA-approved drugs on the market that target PPARs. However, like many pharmaceuticals, these drugs come with undesirable side effects like weight gain (which is especially bad for people already struggling with metabolic disorders) and heart complications. Although some cannabinoids can cause weight gain (munchies, anyone?) and some consumption methods could trigger heart issues, others do not, so it’s possible that researchers could soon design new treatments that use specific cannabinoid combinations with both minimal side effects and maximum therapeutic potential.


How We Could Make CBM a Lot Less Rare

Right now, it looks like CBM primarily comes from the Carmagnola hemp variety, though it’s very likely that this cannabinoid is produced in other cannabis varieties or strains, too.

Growing rows upon rows of Carmagnola probably isn’t cost effective, though, especially if hemp naturally produces this cannabinoid in small amounts. Instead, breeders could back-cross plants with Carmagnola to make new strains that contain greater amounts of CBM. Or, biotechnicians could genetically engineer bacteria, yeast, or even cannabis itself to crank out industrial quantities of CBM.

Do note that no clinical studies have yet been performed to see if CBM can treat human patients. And until the federal government catches up to the medical latest research and lifts its restrictions on scientific investigations into medicinal cannabis, we may have to rely on other countries to do the heavy lifting first.

And, as always, keep in mind that none of this is medical advice. If you’re curious if cannabis can help with a medical condition, always consult your doctor first.