What Are “Solar Hits” and How Else Can You Burn Weed Without a Flame?

We all know that the sun can grow some of the best weed on the planet. But did you know that you can use the sun to literally smoke that same weed, too?

Within, ahem, enlightened circles, environmentally-conscious and cleverly-crafty cannabis consumers have utilized the power of the sun to light their pipes and bongs. Called “solar hits” or “solar puffing,” this technique employs a lens to focus sunlight into a hot, intense spot on the bowl in the same manner that many of us attempted on ants when we were curious, pyromaniacal children. 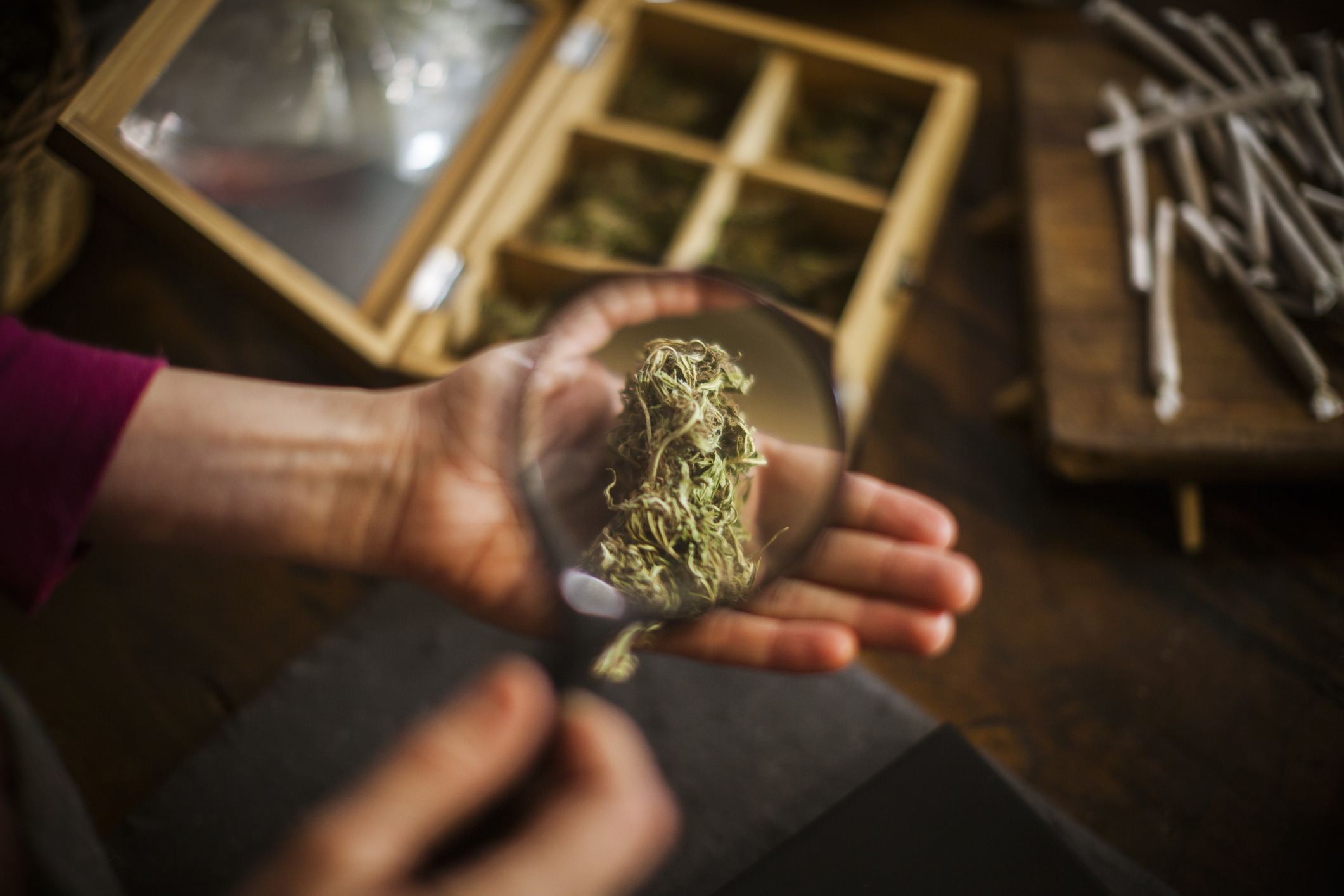 How Does One Perform a Solar Hit?

Solar hits are easy. Just take a magnifying glass or a plastic Fresnel lens and hold it over your bowl of weed (or, if you really want to show off, over a joint or blunt). Tilt the lens so that the sunlight shining through the magnifier focuses into a single white dot. Within a few seconds, you should see (and smell) smoke burning from this sun-scorched spot.

Once you see the light dot burning the weed, start taking a puff. The combination of solar heat and oxygen flow should ignite the bowl. And voila! You just burned some weed without needing a lighter or electrical outlet.


OK, What’s the Point of Taking a Solar Hit?

Solar hits are, to some extent, a novelty method for smoking weed. But it has its uses, too.

For starters, so long as the sun is out and it’s not too cloudy, you can take solar puffs off your pipe. Solar hits will work regardless of if it’s incredibly windy. And it’s incredibly handy in case you forgot (or lost) your lighter. A Fresnel lens, for instance, is typically no larger than a credit card, so you can carry it in your wallet, purse, or pocket at all times.

Best of all, since a Fresnel lens doesn’t require any kind of fuel or maintenance, just one can light your bowls forever.

Additionally, butane lighters, matches, or even hemp wicks may alter the true flavor of your craft weed. When you take a solar puff, you’re tasting the weed and only the weed, making this the perfect consumption method for the hardcore cannabis conneissours out there, as well as the eco-friendly.

And yeah, solar hits minimize our carbon footprint and blah blah blah. In reality, commercial industries, deforestation caused by raising cattle, and automobile traffic are the biggest contributors to climate change. Whatever greenhouse gases released while smoking weed are relatively negligible when it comes to saving (or destroying) the planet. 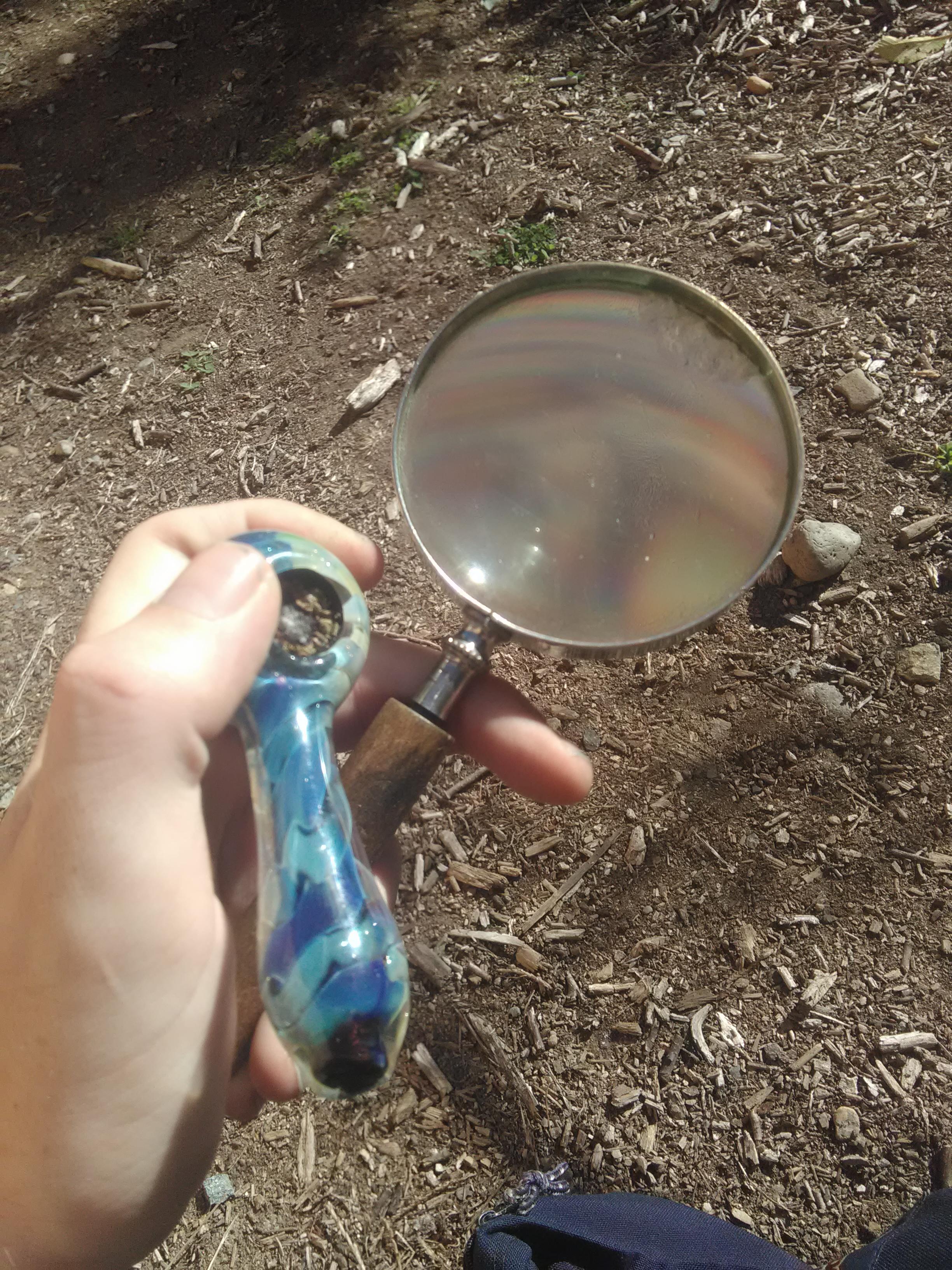 Are There Other Ways to Light a Bowl Without a Flame?

Indeed, you don’t need a magnifying lens to perform a solar hit. If you’re stranded out in the wild, or you just happened to forget bringing a lens with you, there are alternatives.

For instance, if you’re in a cold, snowy climate, you can use pure ice to focus sunlight into a single, white-hot point. That may sound crazy, and it’s not as simple as it’s written.

To take a solar hit from ice, the ice must be both completely clear and mostly free of air bubbles. Foggy or dirty ice won’t do. It also helps to mold the ice into a sphere as much as possible (though it doesn’t have to be a perfect sphere). If the ice transmits enough light, it’s possible to focus the sun onto your bowl just as you could with a Fresnel lens.

As if using ice to start a fire didn’t sound wild enough, you can also use a condom to focus sunlight into a scorching point, as well. Yes, a condom, the kind sitting in your wallet doing a whole lot of nothing lately.

As with the ice trick, many of the same principles apply to using a condom for a solar hit. You’ll want a non-lubricated condom (so it doesn’t slip out of your hands), and you want it to be as plain-jane as possible (no colors, not ribbed, etc.). Fill the condom with water and tie it off to form a ball. If enough light can shine through, sunlight will focus through the rubber in the same fashion as a magnifying glass. Boom! You just essentially jacked a star off into your flower. Toke away, you galactic perv! (Just don’t use the condom after employing it for a solar hit.)


What Are the Drawbacks of the Solar Hit?

Obviously, solar hits only work if the sun is readily available. Although solar hits can work in even the windiest conditions, they’re out of the question at nighttime or if it’s incredibly cloudy. However, if the sun is out while it’s raining, you can still take solar puffs even through a downpour.

Furthermore, solar hits require patience from people who haven’t spent hours of their childhood summoning fiery doom unto ants and other innocent insects. To get the solar hit to work, the magnifier must be angled just right to focus the sunlight into a beam hot enough to trigger ignition. Some folks are more than willing to master that technique; others may feel it’s pointless if they’ve always got a lighter on hand.

But we will say one thing about solar hits: They definitely beat rubbing two sticks together to get a smoke sesh going.