Emo music and weed don’t necessarily go hand-in-hand, but they do for Bert McCracken, frontman of The Used.

A self-proclaimed “death drinker,” McCracken struggled with alcoholism for years, which threatened to destroy both his career and personal life. His saving grace? Cannabis.

It’s been 18 years since The Used released their debut self-titled album in 2002, which amassed a cult following and influenced countless pop-punk and emo acts to follow. It’s also been eight years since McCracken has gotten sober. What’s remained a constant over the years is music — which the Utah bred ex-Mormon refers to as his personal church — and weed.

McCracken credits cannabis as a life changer that’s helped him avoid drinking and be a present husband and father for his daughters, with whom he lives in Australia. (He left the United States several years ago, and honestly, who could blame him?)

While cannabis laws remain strict in Australia, despite the recent reform in the capital city of Canberra, McCracken has teamed up with California-based cannabis brand Five Star Extracts to create a high potency syrup tincture. The first flavor to be released is aptly named “The Taste of Peach,” a play on The Used’s breakout single, “The Taste of Ink,” which arguably remains the band’s most recognizable song. This will be the first flavor in the lineup of Five Star Extracts’ syrups, which each contain a whopping 800 milligrams of THC.

The syrup will be sold exclusively throughout the month of April, which also happens to be when The Used’s newest album Heartwork is set to drop. In other words, it will be a month full of various highs for this frontman.

McCracken spoke to MERRY JANE over the phone while quarantined on the other side of the globe. He discussed his battle with addiction, what we can expect from the Five Star Extracts partnership, the sound of the new album, and how the COVID-19 pandemic is affecting the music industry.

This interview has been edited for length and clarity. 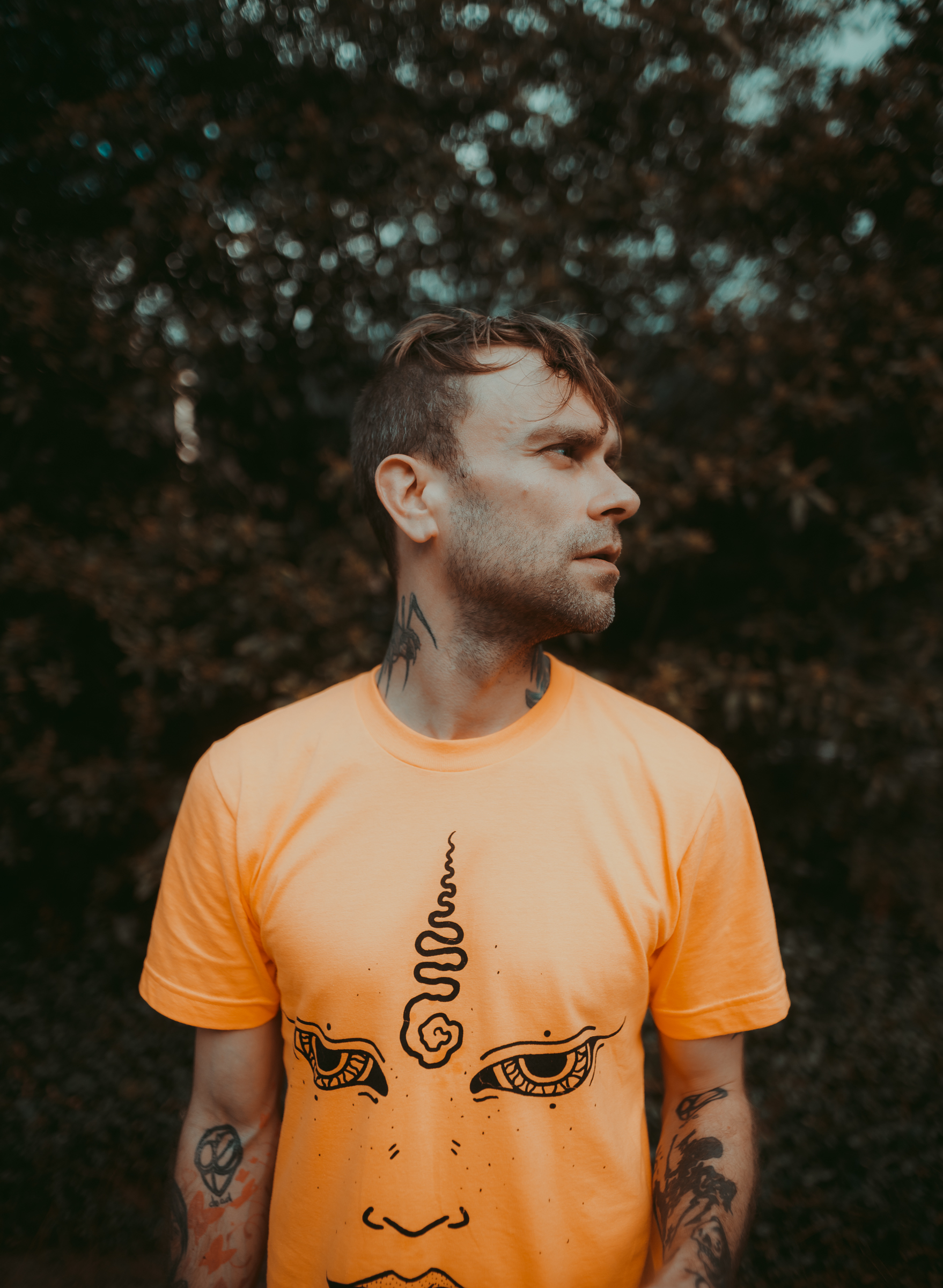 MERRY JANE: So I know you love weed, but how did this partnership with Five Star Extracts come about?

Bert McCracken: They love The Used, and they’re working with people who we've known for 20 years. So they reached out to me.

What made you want to make this syrup tincture as the first product?

I really, really enjoy using marijuana before I work out. I get a really cool mind-muscle connection when I'm high. Time flies when you're stoned. So, we have this tincture. This syrup is some of the strongest, most potent stuff on the market. It's this new watersoluble nano THC that hits you twice as quick as other edibles would, and it's an 800 milligram bottle. So I don't know if you're familiar with dosage...

It comes with a dosing applicator, so you can add 10 milligrams in your beverage or whatever. So after that, depending on what happens with this thing, we're going to be hopefully out promoting stuff. But there'll be cool extracts and shatters and a bunch of really fun stuff to look forward to. Bath bombs and lotions and all sorts of stuff.

But yeah, so I thought [the syrup] would be perfect right before you hit the gym — take it with your pre-workout [regiment], or if eventually we develop it into a pre-workout product. I think that it's a little bit easier to be active on edibles [opposed to smoking]. 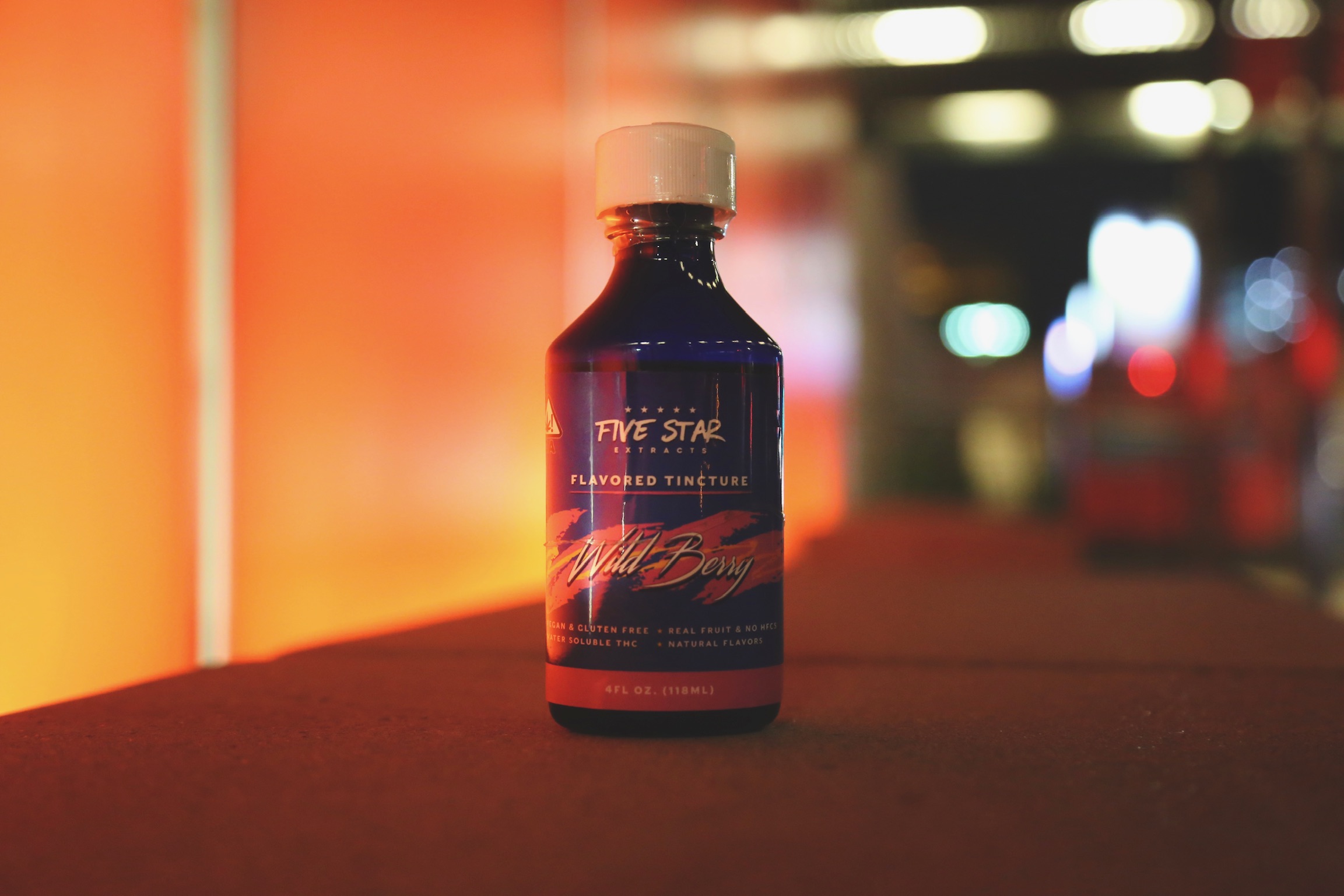 For sure. Do you have a favorite workout to do when you're stoned? I like consuming an edible before yoga, for example.

Yeah, I’ve been into resistance training for the last year. I’ve suffered with depression since I was a child, and it's the type of depression that's not crippling, it's just always ever-present. I have the ability at any moment to just go off the rails and treat myself like a horrible person in my mind for no reason. But the one thing that stops me from feeling that way is working out.

I've really been enjoying doing heavy squats. I mean, I'm such a little guy. I never imagined I'd be able to put the weight of my body on my back and squat down. It's more rewarding than I thought it'd be, and it’s all thanks to weed [laughs].

So true. As someone who also deals with depression, I think setting little goals, whether it's with fitness or something else, and going out and doing it... the sense of accomplishment you get is so beneficial. 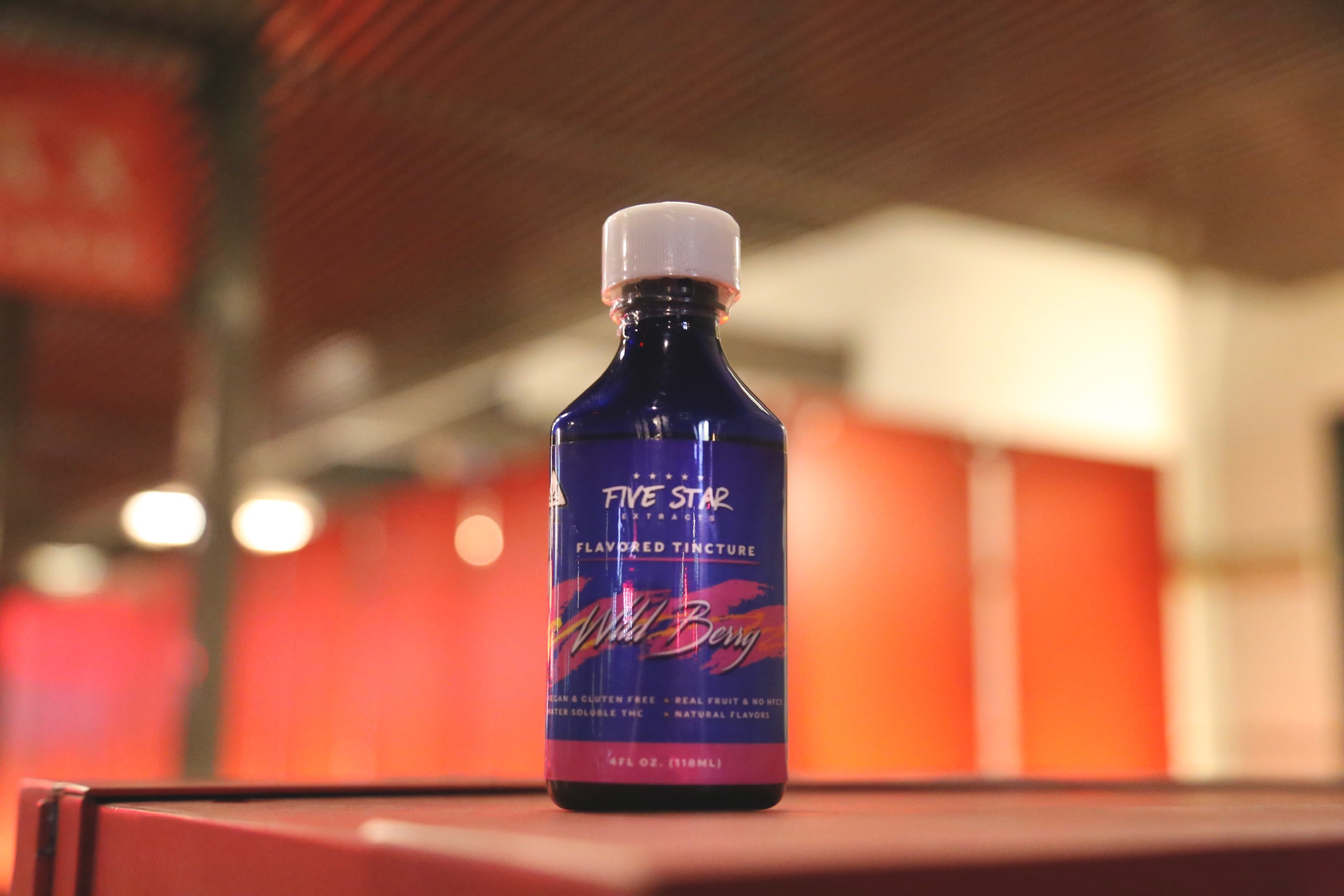 Yeah, for sure. And speaking of being a dad… you talk about how cannabis has really changed your life and helped you be a more present father, as opposed to using drugs or alcohol. Can you talk a little bit about that?

My personal story — always a disclaimer because addiction is A, very personal, and B C, D, E, F, G, there's so many nuances. I did go to rehab… and there was a court-mandated situation where I had to go to Alcoholics Anonymous meetings. So I really leaned on AA for the first year or so of my sobriety from alcohol. My last year of drinking was just absolute torture for everyone else around me. I was crazy unhealthy. When I fell off the stage [performing at a festival], and was subsequently weighed in at the hospital, I was almost 210 pounds. And I’m 5’7”.

So yeah, my moment of surrender with alcohol came at a much needed time. I'm lucky enough that marijuana was a saving grace in my sobriety from alcohol. I was always the type of person that could separate the two, and I know a lot of people who are polar opposite.

Being able to avoid alcohol and to stay humble about my sobriety from alcohol for nearly eight years now is key to my daughters’ happiness. I'm lucky that I'm able to use marijuana responsibly and not have it pull me back into that vicious cycle. When I'm [talking about being] not sober, I'm talking about that horribly destructive force that's ready to die at any second. But that's just not what happens when I use cannabis. I'm actually me.

I feel like cannabis inspires the opposite of destructive. It helps people almost be their best selves, stay creative, and be able to think in different ways.

Right. I think if you're using it responsibly and not like a teenager, like your stereotypical cartoon character pothead, then you can be filled with inspiration. It helps with creativity, it can help with motivation, and it can help with anxiety and finding a little bit of inner peace, as well. I think that's a big part about me being present for my kids. It's like taking a little bit of the air out of the air mattress if it was filled up all the way to the tightest and it was about to pop… and then you just let a teeny bit of air out.

What a metaphor. I get it, though. So, as for creativity, does cannabis play a big role in your songwriting?

I think that THC is a good tool for when you’re stuck in the creative process. It always helps me to be more honest with my art. 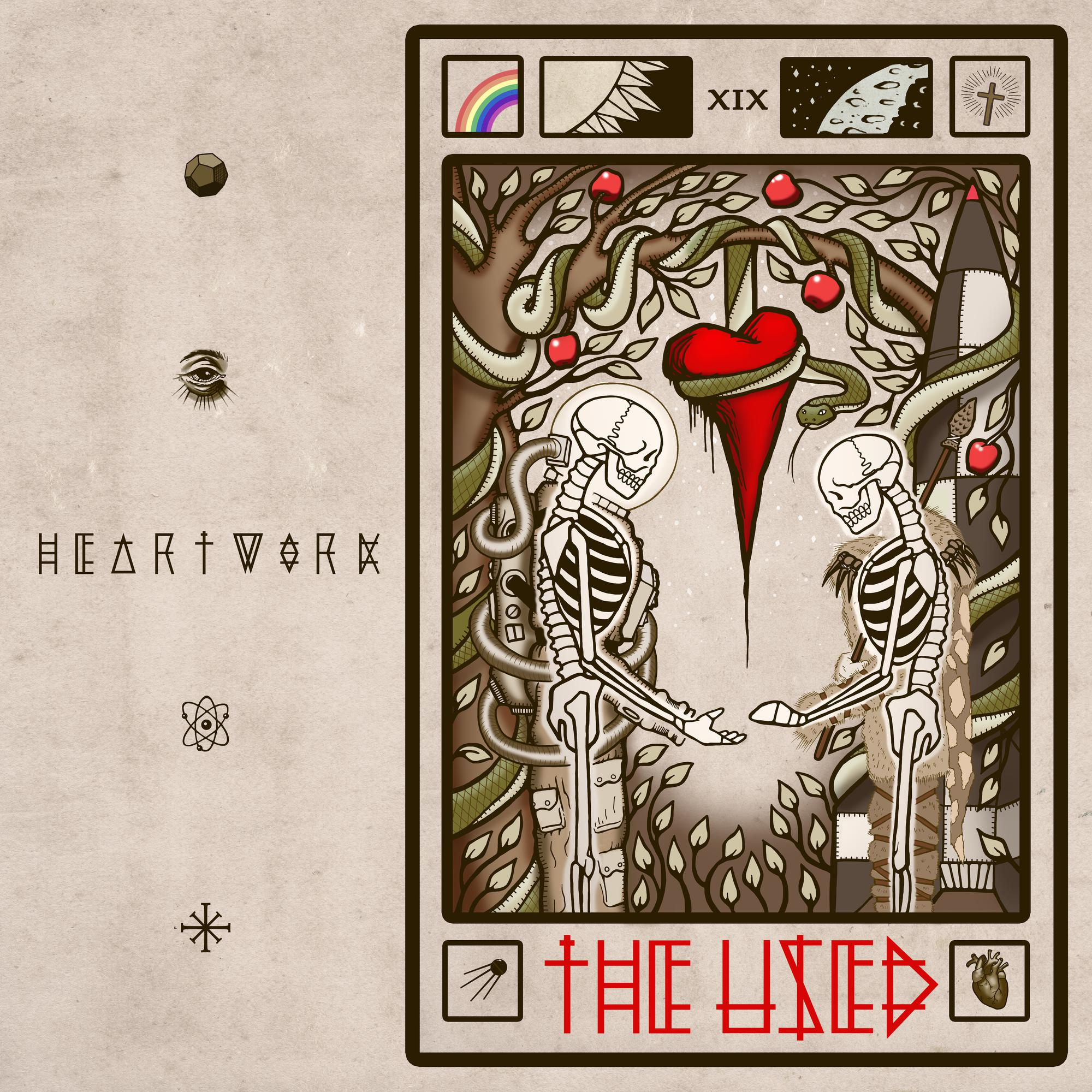 Definitely. So, that said, the new album by The Used is coming out in April, right?

Yeah, I wish it was sooner. I've been listening to it twice a day for like four months now.

I got the advanced stream today, so I’ve only just started listening, but I really like it! I'm excited for you guys to release it to the world.

Yeah, we are too. It's so crazy and incredible to be doing what I always dreamed to do since I was a little kid for the last 20 years now… while still having the most fun I've ever had writing and recording music and taking it out on the road and playing it live. I think it really shows in this record, even the songs about despair. It’s painted in this light. It's very colorful in my mind — being able to kind of take the dark colors and make them neon, if that makes sense. The place we're all at in our lives, mentally and physically, is just… we've never been in such a good place as individuals and together as a band.

That’s so awesome. OK, not to be a downer, but what do you think's going to happen with touring now that we're in this COVID-19 pandemic alternate universe?

I think during this scary, crazy, exciting, boring pandemic, it'll create this longing and need for live music that maybe we took for granted a little bit. You know, you see a lot of people with their phones out at shows and it's like, maybe we should live in the moment just in case those moments do get taken away from us. Life is very short. I think music will come back in all its glory, and it'll be even more exciting than it was because it's been something that we've been denied for a little while.

I think you're completely right. Hopefully this whole thing will make people feel more grateful and more present at shows, as you're saying.

Everybody's doing live streaming and all this weird stuff that's not the same. Live music is a whole different thing because you're there and it’s a deeper connection.

Right? You have to be in the same room with everybody singing the same words and feeling the same energy.

Yeah! One of the coolest parts about being human is the reality of that connection you feel — the inspiration and the amount of fuel you get when you leave a live concert that you just lost yourself in. You have this crazy inspiration for the next couple of days of your life.

Yeah. Everything will hopefully get back to normal soon. It's going to help if we do what the experts are advising us to do. Weird times. Stay home. Let's protect somebody else's grandma for a second.

Right?! Is there anything else you want to add for our readers?

I always say that The Used has the most special, crazy, hardcore, diehard, dedicated fans in the world. And so this record — I think more than a lot of the other ones — is for the hardcore fans of The Used. I think everyone's gonna really love it as much as I do. 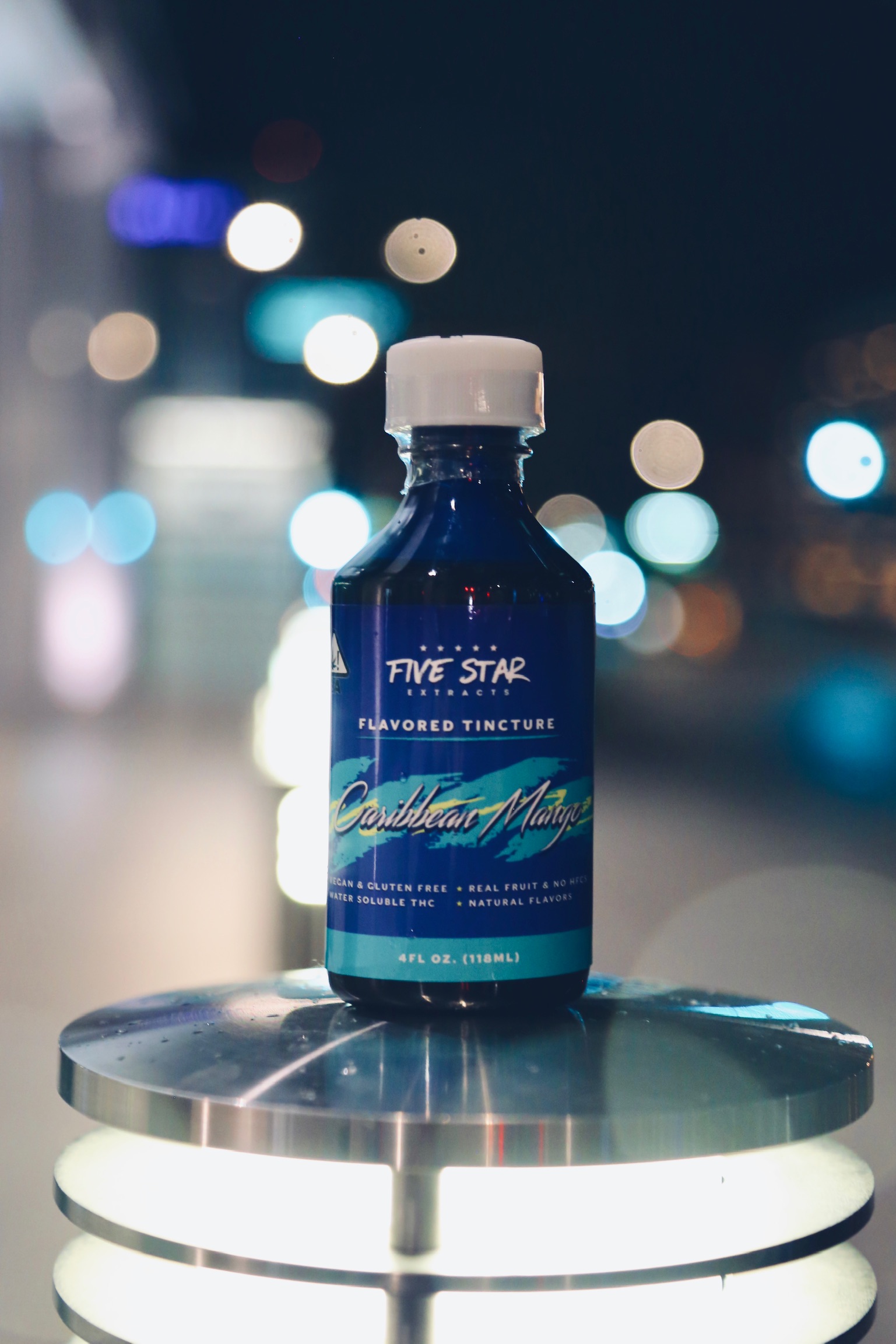 Five Star Extracts' Flavored Syrup Tincture in “The Taste of Peach” will be available throughout April at all Connected Cannabis Co. locations in California. Visit the company's website here

‘Heartwork’ is out April 24th via Big Noise.