Like beauty, retro is in the eye of the beholder. But nothing screams vintage like the Bacon Bursts we spotted at Mama D’s Sneaky Speakeasy, a 420-friendly underground salon and event space. It was like teleporting back to an old school ‘50s or ‘60s dinner party — where weed was the center of the gathering. These bites were inspired by the Tiki food appetizer, Rumaki, created by Trader Vic’s, who we firmly believe would have infused food on the menu in an alternate universe.

While you can find most vendors slanging brownies or desserts with THC-spiked chocolate chippies, you go to a place like Mama D’s for an entirely different stoned experience. Places with quality food, social contact — which is normally lovely, except during a pandemic — and cannabis are still hard to come by, even in locales like California where recreational cannabis reigns. But, nestled between Brooklyn and Queens, is a gem of a speakeasy that attracts the greenest people in New York.

With weekly events including Sunday Bakes, where infused-popcorn flows as freely as rivers of sunshine in the desert, and more serious soirées like live-streamed longtable-talks designed to bring people together from diverse industries, Mama D’s always has something going on.

Mama D’s is special because the food is to-die-for. Some items are infused, other dishes are not. But all of them are equally delicious — and doused in personality. Mama D’s signature “Bread with sh*t On It” incorporates gourmet savory foods with our favorite ingredient: l’herba.

Bacon Bursts are but one of the legendary hors d'oeuvres on the regular menu. And, although they aren’t as health-conscious as the “Fucking Kale” dish, these are supreme munchie foods. Mama D tweaked this to include THC specifically for us — how lucky are we?! Normally, these luscious bursts are sans sinsemilla. That said, you will want to make them on the weaker side if you want to pop a couple.

Try this easy gourmet appetizer for your next house party. The spicy, savory, sweet, and fatty bites are every bit as decadent as the menu offered in the speakeasy. We caught up with Mama D, the queen of delectable edibles herself, about what the intertwining worlds of cannabis and hospitality hold. 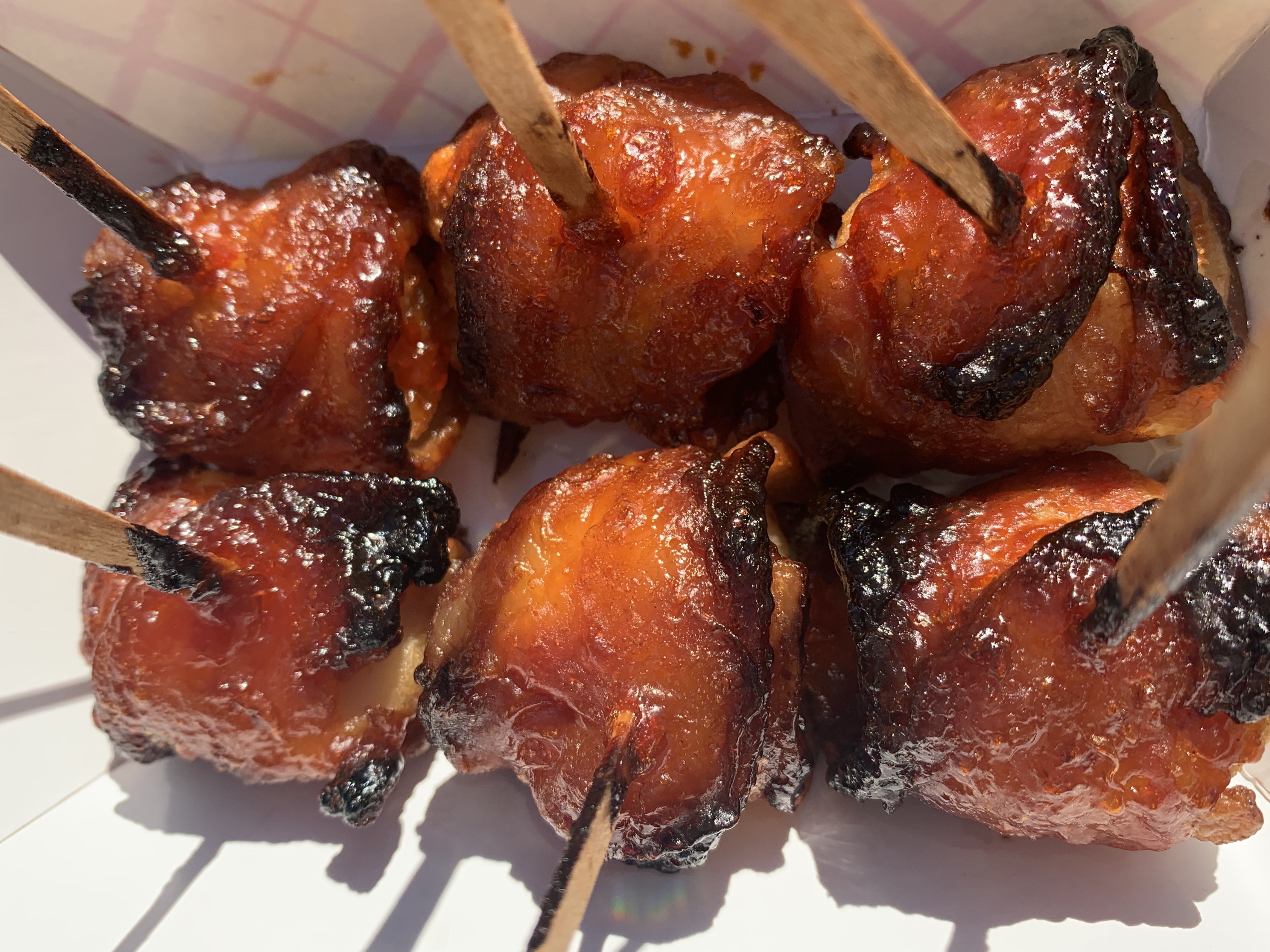 Prep Time: 30 minutes (or fewer if you can con some friends into wrapping!)

1 can of whole water chestnuts

To make it “sneaky,” as D calls it, you have two options: A tablespoon of strong cannabis-infused butter or glycerin tincture. See below for details on mixing that up.

Drain water chestnuts and place in a bowl. Douse with soy sauce, toss to coat, and set aside for the rest of prep. Make the glaze by dissolving the brown sugar in ketchup, add sauces to taste and mix well.

Halve the bacon slices, wrap one water chestnut with 1 half-slice of bacon and secure with a toothpick. Place on a parchment lined baking sheet, continue until all of the water chestnuts are wrapped.

Coat each bacon burst with the glaze, you can dip or paint it on with a brush. Reserve the extra glaze. Bake for approximately 20 minutes.

To make them sneaky, add infused butter (gently melted) or glycerin tincture into the remaining glaze mixture while the bacon bursts are cooking. After the 20 minutes of baking, remove the BBs and coat them with the newly infused glaze.

Return to the oven for the remaining 10 minutes or so, until the bacon is just right. Allow to cool for two minutes before serving.

Decarboxylate one gram of cannabis concentrate at 225°F for 20 minutes. As the decarb period is ending, melt half a stick of butter. When the butter is fully melted and warm, drop in the concentrate and mix until fully dissolved. Place in a jar for future use, this method makes four tablespoons with 250mg each, enough for this recipe and a few others.

For tincture, warm the glycerin and stir in decarbed concentrate, you may need to emulsify with a stick blender depending on the product you are using. 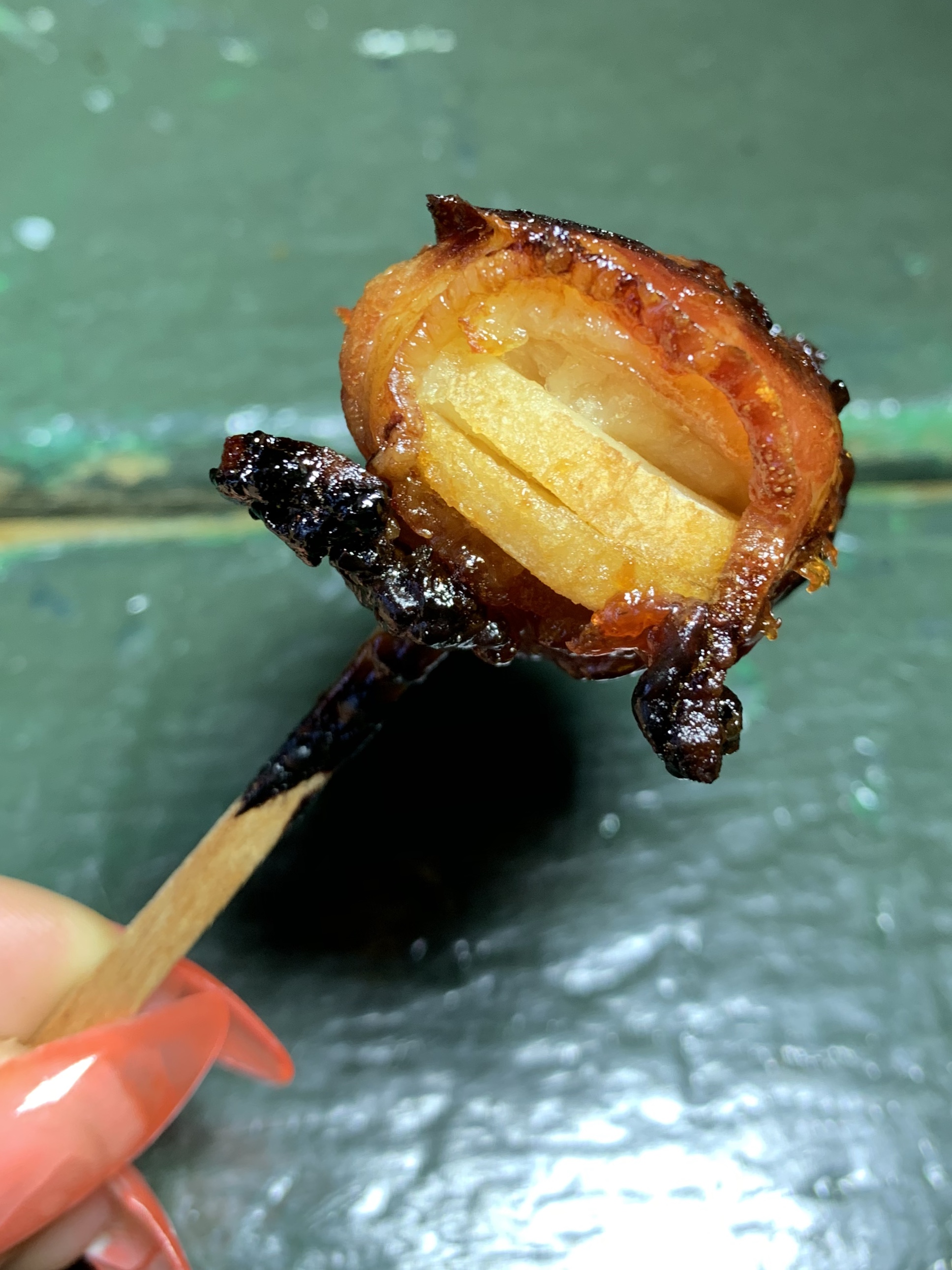 (This interview has been edited for length and clarity)

MERRY JANE: Why do you think people seek out experiences with cannabis, versus only using it?

Mama D: For myself and many others, cannabis is an experience enhancer that should be approached like sugar, caffeine, alcohol. That fact it’s still considered on par with heroin by the US government belies their multi-generational agenda to use cannabis’s Schedule 1 status as a tool to excise poor/brown/black people from the citizenry. If one can legally go out on the town and devour a danish, mainline espresso, and/or knock back a martini, there is no logical reason they should not be able to legally smoke a doob.

What is the biggest hit food item at your events?

At the Sneaky Speakeasy, I center most of my menus around Bread with sh*t On It, aka homemade breads with vegan, veggie, and meaty toppings. But at our Sunday Bakes (themed dinner and movie marathons), I employ my full-stoner creative capabilities to design a custom five-course tasting menu around each movie marathon theme.

One of our meaty appetizers (that I am apparently not allowed to get rid of) is bacon bursts — bacon-wrapped, soy-soaked water chestnuts with a sweet an spicy glaze — my riff on the 1950-60s classic, Rumaki. This August, at our Sunday Bake Film Festival, I will be releasing my Sunday Bakes cookbook where you can learn to cook multi-course meals with your friends while meal-prepping for the week ahead!

Do you think that edibles in a hospitality setting will be more popular as we go forward?

If there’s money to be made, it will be, but how the integration of edibles into the hospitality industry unfolds will depend on which types of businesses can get cannabis permits and licenses, as well as what exactly those permits/licenses allow the owner to do.

If procuring the necessary paperwork goes the way of New York State liquor licenses, I am sure it will be a prohibitive nightmare for small businesses.

Another important factor: What edibles exist for integration into hospitality experiences. Will interstate commerce be permitted? Who will be producing the edibles?

I fear that the establishment of the edibles industry in NYC will mirror the Disneylandification of the hospitality industry here — where, increasingly, only monied, corporate establishments can afford to open and grow businesses. Snooze! Sounds like some bullshit.

This is why it is so important that womxn and minority-owned businesses stake their claims in the cannabis and edible industries and that we rally to support them! Otherwise, once it is legal, the only cannabis we’ll be able to buy is some shitty strain spliced together according to a report presented by some dude in a boardroom who doesn’t even know that cannabis is a plant.

When cannabis is legal, do you think you will adapt, or will you keep doing things your way?

We are presently working to bring Mama D’s Sneaky Treats to the recreational markets of Los Angeles and Denver. We love these towns and hope that having in circulation our Sneaky Preees, which are pre-rolls, Sneaky Pantry Products like butters, oils, tinctures, and our signature edibles, Mama D’s Sneaky Balls, will help us enter the New York market once it opens. Then, we can party in NYC, Denver, and LA the way we party now at the Sneaky Speakeasy.