Above, a jelly cake by @eatnunchi

The absurdist video for Justin Bieber’s “Yummy” is set at a party featuring a spread of ‘80s-inspired dishes, including cakes made of gelatin: two are translucent and filled with peas, there’s a funky canary-yellow one, and another that’s creamy magenta. They were made by the food stylists Emily Marshall-Garrett and Maya Bookbinder, two of the many food designers currently getting their hands sticky with molded jelly cakes for music videos, fashion shoots, and accessories advertisements alike.

Gelatin — and aspic — has a fittingly funny food history. It burgeoned as a US cooking trend in the 1950s and didn’t really go away until after the ‘80s; whole meals were encased in jelly in almost surrealist, alien-like spreads that practically screamed “retro-future.” It’s not exactly appetizing to see flesh-colored sausages suspended in wobbly, vibrant matter, but it’s certainly fascinating in a “What were they thinking?” sorta way.

Jelly cakes began experiencing a renaissance of sorts around 2014, when Japan’s Kinseiken Seika Company created the raindrop cake (composed of water and agar-agar, a Japanese jelly made from red algae), and it subsequently went viral. Now, not only are Japanese sweets super trendy across social media (souffle pancakes!!), but the raindrop cake’s virality seems to have prompted an obsession with jelly art. A Facebook group called “Show Me Your Aspics,” created in 2016, now has 37,000 members, and there are now countless Instagram accounts showcasing imaginative food sculptures that bounce. 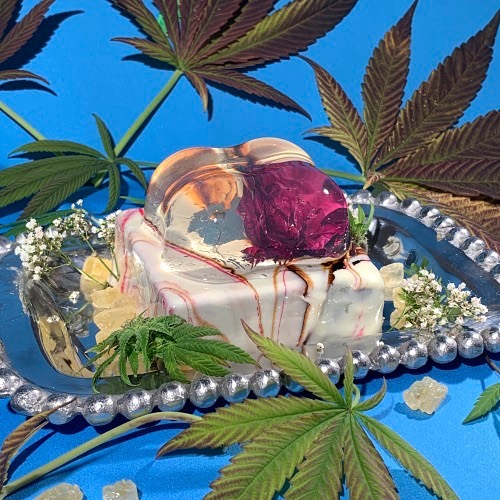 Above, a jelly cake by Sharona Franklin

It makes total sense. The appeal is partially due to the uncanny aesthetics of jelly cakes; these creations may sound like a fifth grade science experiment, but they’re edible and often approached like art objects. And jelly cakes jiggle! Whether making them or observing them, they are the perfect outlet for the THC-laced brain.

“There’s something otherworldly about [jelly cakes]; it doesn’t have any physics to it whatsoever, it just jiggles, it’s all powerful, it’s all mighty, you’re kind of scared of it a little bit,” one of the jelly-makers told Munchies about “Show Me Your Aspics” in 2018.

Other members noted that, especially in the current political climate, jelly is a soothing escape — visual ASMR, if you will. We strongly agree, which is why we put together this list of current jelly cake-makers playing with gelatin, aspic, and agar-agar in the weirdest and most captivating ways that just go perfectly with a side of marijuana.

Vancouver-based artist and disability activist Sharona Franklin doesn’t just make jelly cakes; she has a whole Instagram account dedicated just to her gelatin sculptures. In December, she described these beauties to Bon Appetit as “a shrine to cellular use of animals.” Her works encase thistle and baby’s breath in gelatin, or orange blossoms and candied oranges aside wild rainbow smoked trout with pancetta, olives, lemon, carrot, capers, and sage in a rosemary chili broth gelatin. They are intricate and exquisite. (So wonderful, in fact, that Gucci ripped her off.)

While the edible ones are obviously meant to be eaten, the more sculptural works begin degrading the moment they’re finished, because gelatin and all Franklin’s materials are biodegradable, and that’s the point. Drawing on the aesthetics of the ‘70s, Franklin’s gelatin projects explore ideas of domesticity and disability, the limits of wellness culture, as well as healing — many of her jelly cakes are CBD-infused, “for us chronic pain folks and anyone needing a lil soothing relief.” Franklin currently has an exhibit of her work up now at New York’s King’s Leap, New Psychedelia of Industrial Healing, her first US solo show.

Pouches, cubes, cakes, spheres, and pirouettes — just a few of the ways LA food experimentalist Lexie Park approaches her agar-agar creations. She makes them for friends, parties, and events: recently, she sent jars and pouches of jelly to New York for a Vans shindig, and she’s made jelly balls and jelly squares filled with fish for art shows. Park has also made edible glitter to sprinkle on top of smiley face vodka jelly shot bites for a Come Tees party last November, and she’s even suspended La Mer in jelly. I’m personally obsessed with these insane Yerba Mate caviar jelly cakes she made for a queer party night called Swallow, as well as this fruit cake with a jelly infant in the middle created for a friend’s baby shower.

“Silly jello” is the caption for this anonymous artist’s video of her poking a jelly cake filled with strawberries and carnations. Somber music plays in the background as she slices this other flowery one, made with cantaloupe juice. “This is kind of grossing me out,” you can hear her say as she jiggles this cake, which she calls “cantaloupe and raspberry wobbly man with marigolds and nasturtiums and dahlias.” But perhaps the best videos from this account are when jellies meet nature, like this mushroomy guy hanging out on a rock by a stream, or this “baby tangerine agar” cake being plopped casually into a lily pad-filled pool.

Follow spitfire0729 — or かんの (human sadness) — for strange little films of bananas swaying on top of caramel milk jelly cakes, apple jellies doing the #jellydance, and a “nuclear family” of cherry-topped mandarin and milk jellies surrounded by kiwi slices. There are even eulogies to torn and collapsed jellies, like this coffee milk one: “He couldn't stand the heat of caramel's magma. His body was torn in a blink of an eye, it was a shocking sight. The body sank in the melted body. The orange color pastor closed his heart, some flowers were attached beside him. The following is written on his tombstone: coffee milk & condensed milk jelly, almond & banana caramelize, cinnamon caramel sauce. R.I.P MAN OF JELLY.”

This unnamed artist doesn’t work solely with jelly, but their other bizzaro, vegan cakes are worth a gander in addition to their truly outlandish gelatin creations. Gr8kakes once made a custard with gummy balls, red hots, and baby’s breath, for instance. One cake looks like a moss-covered rock topped with translucent spheres; there’s another cake in the shape of a fish made of rose oat jelly, swimming in a “sweet basil rosewater” pond. And for Halloween last year, the artist used a jelly cube to suspend a skeleton hand. Elsewhere on the account, you can find jellies that look more like geodes than food. Recently, the objects suspended in gelatin have gotten even stranger: a dollar bill, tea lights, hair... Absurd and low-key gross-looking, but hey, I’d eat most of it anyway.

Gay.jelly is brilliant in its illusion of simplicity. At first glance, this page seems just to be a hand presenting various kinds of jelly cakes, nothing crazy. But look closer and you’ll notice that even their very first post is a bit off-beat: a cake made of beet juice and Cynar (a bitter liqueur) sliding slowly down a pan. One of them is filled with pepperoncini and lemon. Another with pickled radishes. They’re not perfect, but that’s the beauty of them — like wabi-sabi but jiggly.

Other uploads, such as a lemon jelly with black sesame and red date, or a big fat chrysanthemum tea jelly cake with pickled mustard greens and melon mochi, and the latest, a Mountain Dew jelly with lotus root, are presented without fuss. They’re not even arranged with the precision of most jelly cakes, and that makes them weird and special. And the videos of certain cakes being torn into — like this black tea and manadarin orange jelly with peas, or this freaky creation involving Sprite — is the kind of crossover gross-out-ASMR sh*t I live for.

Speaking of ASMR, there’s a whole contingent of YouTubers who make content that connect stimulus videos and Mukbang — and there’s nothing like it when you’re stoned. A large subset of this community is all about making and eating jelly cakes and candies (you can search #ASMRjellies or #jellyeatingsounds if you’re super into it), but the best account to dig into comes from Abbey ASMR. To wit, she makes her own jello cups, drinks out of them, and then eats the cups. Here’s a supercut of ten of her jelly videos, but there have been more since, like jelly noodles, fruit jelly, a blue jelly flower she made from Skinny Mix’s “Mermaid syrup,” and grape gummy bears in jelly, for the purple food episode.